Contemporary German design is the result of the important energy created by Bauhaus and all the artistic avant-garde that exploded in the first half of the 1900s. The concept of functionalist design has evolved, focusing above all on the technical reliability of industrial production as well as on the values of innovation, quality and rigor, which have been handed down.

After several collaborations with Jasper Morrison, Ron Arad and Michele de Lucchi, the German designer opened his first studio in Berlin and a second one in Singapore.

Aisslinger is one of the most awarded designers, having received awards all over the world, such as two Compasso D’Oro “nominations” and eventually winning the award in 2004. His works are featured in the permanent collections of the most important international museums of the sector.

The LoftCube project has been an international sensation: a compact living volume, with large windows, repeatable as an industrial design object, which combines technology and aesthetics.

These principles are the basis of his work on design; one for all Juli armchair, designed for Cappellini. In the various versions of this seat, research is evident on the use of new material elements, ranging from plastics to polyurethane to refined fabrics and textures.

The textile designer studied in Holland, where she focused on the various ancient and modern techniques related to the production of fabrics. Research has led her not only to technical contamination, but also to that of contrasting materials, textures and shades in order to achieve a compositional balance, supported by the unconventional use of geometry.

Her creativity passes through tactile and (three) dimensional sensations, which are essential components in her work on the carpets designed for CC-Tapis.

Bliss is a dissonant product, not “caged” in the classic rectangular shape. Its geometric elements are surprisingly chromatically and volumetrically amplified, beyond the predictable perimeter lines.

“My work is driven by intuition and the desire to create. While I consider myself to be a dreamer in the creation of new atmospheres, I am able to quickly translate those ideas into tangible works using the right textures, materials and colours. When asked for my vision in collaborations, I feel a certain sense of freedom to explore a multitude of possibilities.”

Winner of 2 Compasso d’Oro awards, the Munich-based German designer has always distinguished himself for his restrained, sober and minimalist language. All his projects have an approach linked to the history of design and architecture as well as to his interest in technology and materials, and to his knowledge of the smallest details of the furniture he has restored.

“Designing chairs touches issues of society, how we live … How life changes – that’s most interesting”

The key word is “simplicity”, such as the Kanu seat for Cassina, where a thin wooden sheet, worked at the edges with meticulous care, wraps a semi-circular plywood seat panel, becoming at the same time structure and backrest. The magic is enhanced by the lack of joints.

The compositional principle of Soft Props is also simple: a system of upholstered furniture, always designed for Cassina. Full volumes stuffed with down are connected to each other through fairly thick tubular elements to highlight the horizontality of the sign.

Born in 1981, Sebastian represents the most interesting novelty factor in the international panorama, which has led him to be appointed designer of the year 2019 at the Maison & Object in Paris.

His style is fresh and modern, linked to the wise use of materials, new technologies but also to traditional craftsmanship, colours and textures.

“There is a sensitivity and identity to my work that emphasizes the function, the material and the detail. I transport and interpret characteristics from various contexts of society and culture and implement them in new artefacts….“

The Ala padded collection for La Cividina originated from the image of the easel that supports the ancient plates in exhibitions. According to this idea, the seat and back are delicately supported by the structure, in the dual option of metal or solid wood finish. 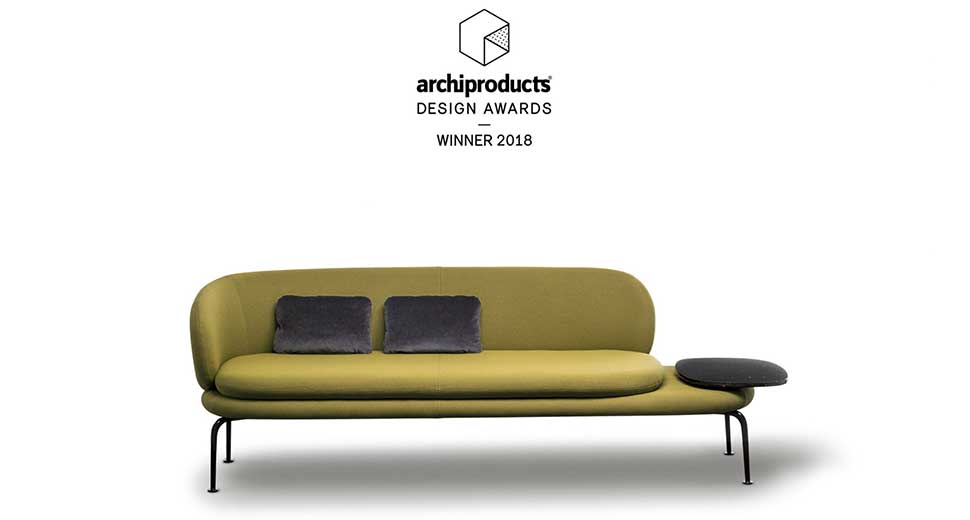 The partnership with La Cividina continued and proved fruitful in 2018, when the Soave sofa won the 2018 Archiproducts Design Award for the contract category, thanks to its thin elliptical shapes and essential rounded lines.